Let’s go back a few weeks to tell you about one of our adventures in China. For martial arts enthusiasts (like Sara), it’s a mythical place. The cradle of Zen Buddhism and the historical temple of the most famous warrior monks:  Shaolin.

To go to the Shaolin Temple, we have to take a bus from Luoyang to Dengfeng. At the bus station we are a bit stressed not to find the right bus. Indeed in this station the buses do not have a number and the name of the destination is written only in Chinese. Natacha is fighting at the ticket office to push the gentleman who is handing his paper to the operator under her nose (classic) and she meets a woman who speaks English. understanding we also go to Dengfeng, she waits for us and tells us which bus to take. A discrete but particularly appreciated help. After checking our tickets and after buckling our seat belts, an employee comes to count the people on the bus … it was not very reassuring.

After a few adventures, we arrive at the historic site by taxi … We are very tired of the trip and our surprise is great when the taxi leaves us on a “drop off” spot far away from the hotel (according to the GPS). This is the first difficulty in our tour, we have  to walk to the entrance of the park, then to pay the entrance fees and then manage to reach someone from the hotel without any internet access. No one seems to be able to help us … We have to walk 30 minutes with the luggage before being rescued by a minibus to finish the way (climb the hill). The hostel is not top but OK for 3 nights …

We are in the middle of Kung Fu schools. Thousands of children live in boarding schools and train constantly. We crossed them a lot on the outside because it does not rain. They are out practicing on the tarmac esplanade of varying lengths along the road in the heart of the village or, on esplanade scattered in the woods or finally along the road that descends to the historical site … The richest ones go to one of the two schools which have more important infrastructures (and large private spaces for the training.

We did not see the inside of the schools or the student housing. We had read a few articles before and watched a documentary, presenting very harsh living conditions. Once there, it was sad to see those young guys who wash at the basin in the street for some. They sometimes eat at the same place … Some schools have more or less private spaces but this is very rudimentary. The bad odors are evolving in the village. The small waste disposal center is 200 meters from some buildings. It’s very dirty.

All the pupils have the uniform of their school … for some it is pants and a Tshirt all distorted with their name written on the collar in the back.

We spent time in the village, it was an authentic experience, disturbing and even embarrassing.

We were not able to visit the Shaolin Temple (too angry to tell you about that). We still enjoyed other things to see: kungfu show, pagodas, hiking to the cave of Bodhidharma. 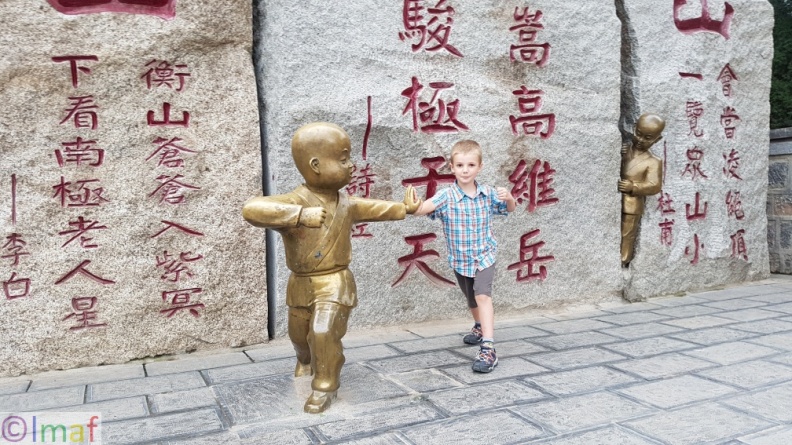 It was once again an intense experience that will remain an unforgettable memory.

To see small students doing Kung fu, you can watch the video.